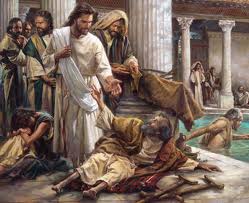 There seems to be two different strands of belief about healing when it comes to the Old Testament. It may seem that way, but there is only one as revealed by Jesus. Jesus fulfills and thus interprets the meaning of the old covenant because he revealed God’s heart.

God is sovereign. As he progressively revealed himself he wanted his people to look to him for everything. He was the one who brought life (happiness, good crops, reward, and health) to those who obeyed and punishment (slavery, disaster, disease, and death) to those who didn’t. The people he was calling to walk in relationship with him as a nation were saturated in the paganism and mythology of their world. His desire was to show them he alone was in control.

There is little revelation of heaven or hell in the Old Testament, only Sheol. Sheol was a shadowy existence in the afterlife where both the righteous and the wicked were held until the resurrection. Due to this, people began to believe reward and punishment for the kind of life you lived was received in this life and not in the next.  This punishment was believed to be misfortune and pain, including sickness and disease. You reaped what you sowed in the here and now. People began to believe that health and wealth were the rewards of God and sickness, poverty, and misfortune were his divine punishments.

They saw God judge the Egyptians with plagues—the Philistines with tumors for taking the Ark—Miriam with leprosy for questioning God’s choice of Moses—Gehazi, the servant of Elisha, with leprosy for taking money under the table after the healing of Namaan. Levites who were lame or deformed were forbidden from serving as priests. Things like these caused the people to believe sin was the cause of sickness, disease, and death.

The religious system and leadership this thought pattern spawned came to teach that if you were sick there was sin in your life. Therefore, you were required to confess that sin to a priest and offer the appropriate sacrifice for you particular sin.  In reality, some sin was the result of unconfessed sin, but certainly not all of it.

This is the same argument of Job’s three friends—the same argument we still hear from many in the church today. But, if you read Job 1-2 it is clear Job’s calamities were the result of Satan’s attack on a righteous man not God’s anger at sinful one. Therefore we have a problem with the belief system of what had developed in Judaism.  Add to this, God’s healing of numerous women who were barren, the healing of children in the ministries of Elijah and Elisha, the healing of Namaan (a pagan foreigner), and King Hezekiah—all without mention of sin or an appearance before a priest with the appropriate sacrifice.

Add to this the revelation of God as Jehovah Rapha—I Am that I Am Healer—which means the essence, as well as character and attribute, of God is healing. In other words—healing is who God is, therefore healing is the will of God. David declares that God heals all his diseases in Psalm 103 and Isaiah speaks of the future scourging of the Messiah as healing for our physical diseases and sickness. When you take a step back and look it appears there are two different streams of thought in the Old Testament, but really there is only one.

The majority of the church has bought into the same strand as did Old Testament Judaism. The body is of little worth because it is riddled with sin. Why worry about it anyway, God will raise it up in the resurrection. Or…if you are sick there must be sin in your life because it is a sure sign of God’s judgment. Or…God uses sickness and suffering to purify us and refine our Christian walk. The vast majority of the church from 500 A. D. until now have set sail in the wrong stream that seems to flow out of the Old Testament. The church has chosen to interpret Jesus through the lens of the Old Testament rather than interpret the Old Testament through the lens of Jesus. And in doing so, God is seen by most Christians as angry, wrath-filled, and out to get them.

Jesus came to reveal who God is. The invisible God became visible through Jesus. He came preaching the gospel of the kingdom and demonstrating its power through physical and emotional healing. He rarely mentioned sin when he healed people. Instead, in ministering to the physical and emotional needs of people, he revealed God’s heart of concern, compassion, and love.

He attributed sickness and disease to the devil and in a furious flurry of healings attacked that dark kingdom and began to set the prisoners free. Nearly 1/5 of the verses (727 out of 3,779) found in the four gospels are devoted to Jesus’ healings and the discussions brought about by it. That’s twenty percent of the gospels. Healing must be very important to God if Jesus spent that much time doing it.

This healing ministry of Jesus so threatened the hierarchy of religious Judaism that they attributed his healings to the power of Satan and eventually voted to kill him before their kingdom was taken from them. They even wrote in the Talmud that “Jesus was hanged on a tree (crucified) on Passover Eve because he practiced sorcery (i.e. he healed sick people thereby bypassing the priest, repentance, and the proper sacrifice—which guaranteed the continuation of a their booming business at the temple).

Two strands of belief? Yes! But…one was man’s interpretation and the other was God’s revelation. Jesus came to interpret that revelation and give us God’s view.