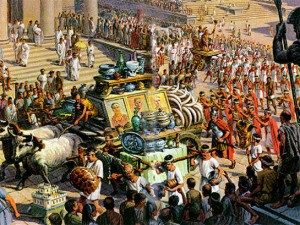 Positioning is everything and our position on the battlefield and every other area of the Christian life is in Christ. At the moment of salvation, every believer was placed into Jesus Christ. Ephesians 2:4-7 paints this picture of security: “But God, being rich in mercy, because of his great love with which he loved us, even when we were dead in our transgressions, made us alive together with Christ (by grace you have been saved), and raised us up with Him, and seated us with Him in the heavenly places in Christ Jesus, in order than in the ages to come He might show the surpassing riches of his grace in kindness for us in Christ Jesus” (NASB). Our position is fixed. Therefore we must war from this position to enjoy the victory Christ has already won.

Satan’s war is against us. He rebelled against God and was cast out of heaven with a third of the angelic host that become the demonic forces. He exists only because God allows it, and  God allows it to show his glorious power that is at work in us through our relationship with Jesus. Therefore, the enemy hates us and we are his mortal enemies.

In the Incarnation, God became man. Jesus took on flesh and went to war against Satan, not as God, but as a man filled with the Holy Spirit, living in total obedience to God. 1 John tells us that Jesus came to destroy the works of the devil. The Gospels use the language of a stronger man (Jesus) binding the strong man (Satan) and pillaging his house. Jesus came to show that Satan and his demonic forces could be defeated by a man through the power of the Holy Spirit in simple obedience to God. Jesus defeated him. He devastated and destroyed the Devil’s power. In fact, Paul puts it this way in Colossians 2:15: “When He (Jesus) had disarmed the rulers and the authorities, he made a public display of them, having triumphed over them through him.”

This amazing picture is drawn from the imagery and language of a military parade that could have been seen in Paul’s day. When Jesus ascended into heaven, he disarmed or shook the enemy off like someone taking off a garment, the same power he had battled against from his birth to his death on the cross. He stripped the enemy of his power and made a public spectacle of him. Jesus exposed the enemy like a conquering king stripping his vanquished enemies, shackling them in chains, and dragging them through the streets of his capital city in a triumphal procession as trophies of war. Jesus also took the keys of death and the grave. He plundered his house and set the captives free. This my friend is total victory.

And Ephesians 2:4-7 tells us we have been made alive with Jesus, raised up with Jesus, and seated with Jesus in heavenly places in Christ Jesus. Where Jesus is we are. What Jesus has accomplished we share in. Jesus has defeated the devil and our position in Christ is a position of victory.

The key to victory is position and if we will remain seated in the heavenlies in Christ we will win every battle. The enemy wants us to come down because he cannot come up. Satan is defeated—Jesus defeated him! That means he is defeated yesterday, today, and tomorrow.

Therefore fellow warrior, stand firm! Or perhaps an even more biblical metaphor might be, “Stay seated in Christ!”