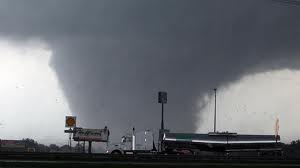 There are some images that are scorched in my mind—images that are just as real today as the moment they happened. The images of President Kennedy’s assassination and the subsequent funeral, the assassination attempt on President Reagan, and the July 27, 2012 tornadoes that ripped across my beloved state of Alabama are still fresh and clear even though the first one happened almost fifty years ago. It is amazing what we remember and what we forget.

The image of the monster tornado that tore through Tuscaloosa, Pleasant Grove, Northern Birmingham, and Fultondale is one I wish could be erased, but likely it will never disappear comletely. That evening in April the skies rained what many might call debris (I choose to call it pieces of life). Although we live almost seventy miles from Tuscaloosa, bits and pieces of the people whose homes were destroyed there came to rest on my property as that dark day became an even darker night.

Early the next morning, I climbed aboard my old Ford tractor and began the job of bush-hogging a large field in front of my home. On my way out the driveway I began to notice shards of paper, roofing, plastic, insulation, and wood. For some unexplainable, but irresistible reason, I began to gather each piece I saw, which meant over the next few hours I must have climb off and back on my tractor a hundred times. I stuffed the fragments in my shirt pocket until it was packed so full I couldn’t get another piece in it. Over the next few hours I filled up several Wal-Mart bags with precious portions of what had once been someone else’s life. There were bits and pieces of bills, checks, business licenses, a page from an old annual, pictures, and other reminders of what a normal everyday life looks like.

At the end of the day, what I held in my hands had taken on an almost of sacred aura. I realized there was more to this than I thought. God seemed to be the driving force behind my careful collecting of these scraps of life. I sensed I was to buy a large frame and somehow fit everything I had picked up in it. So off to Hobby Lobby I went.

As I began to glue the slivers, splinters, and chips together I realized each piece 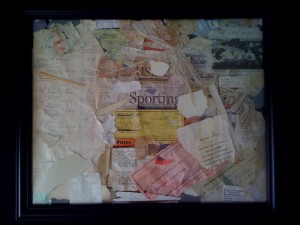 was special—a puzzle piece of someone’s life. While I was working, my wife gave me something she had found earlier in the driveway as she went to check the mailbox. It was a fully intact canceled check from the 80’s. What rocked me was the last name on the check—it was Hannah—my last name as well. That check had traveled a long distance and landed in my driveway. Coincidence? I think not. God was talking and in a rather loud voice.

As I finished the tornado collage and stared at its story, the Holy Spirit began to speak in his familiar gentle voice. “These pieces of life represent the lives of people—the people that I love. Use this collage to remind yourself of the endless crowds you come in contact with every day whose lives are decimated, destroyed, and devastated by sin. Don’t just hurry by—stop and help them put the pieces back together through the love of Jesus Christ. I don’t want you to ever forget the field of destruction you walk through every day. Never forget you carry the answer and the hope within you that can restore what the devil has stolen.”

So…I share this story again just in case there is someone out there whose life is coming apart at the seams. Jesus really does love you and he alone can restore what has been stolen. Just cry out from your heart and trust him with your situation!