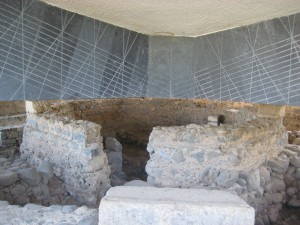 In the Galilean city of Capernaum, among its ancient ruins, sits a very, very special house. This house is the 1st century home of the apostle Peter. Today there is a Catholic Franciscan Church built on pillars above the house and the inside of the home can be viewed from inside the church through a clear pexi-glass floor.

During the initial excavations by the Franciscans, a sacra insula (i.e. holy insula—a block of homes built around a common courtyard) was found, and in one of those houses Peter’s name was discovered with other graffiti inscribed on the wall. The sacra insula also served as one of the earliest 1st century Christian churches and a fish symbol was also found near one of the doorposts. Later in the 5th century AD, the insula was enlarged due to the crowds that worshiped here. This was one of the first house churches and has been a sacred site since early in the 1st century.

Capernaum was Peter’s home town. It was from this location on the northern shores of the Sea of Galilee that he and the sons of Zebedee (James and John) ran their fishing business. Jesus visited Peter’s home and healed his mother-in-law on this site.

Jesus once asked his disciples, “Who do people say that I am?” Their reply was one of the prophets. Then he asked, “Who do you say I am?” Peter’s reply is one of prophetic faith in action, “You are the Christ, the Son of the living God.” Peter could only have known that through a direct revelation from God, and Jesus acknowledged that.

Then Jesus made that famous statement: “Peter (petros = small rock) on this rock (petra = bedrock) I will build my church and the gates of hell shall not prevail against it.” Jesus was not saying he would build his church on Peter (though he was an essential part of the early church), but rather on Peter’s great confession faith. That’s exactly what happened, and the testimony of Peter’s house is that Peter believed it and established a local body of Christ (the church) that worshiped where he lived. James (the brother of Jesus) would later write, “Faith without works is dead.” That is if you say you have faith then act on it. Peter acted on it and today we have in the ruins of Capernaum just one example of his faith.

Do you have faith in Jesus? If you do, then tell share it with someone who doesn’t. Put your faith in action.