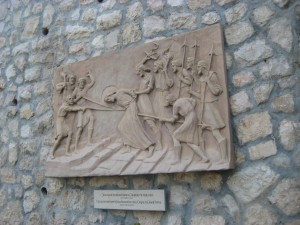 There are some places you visit on this earth that seem to have a soul—that exude emotions as though they were living beings. One such place is located on the northern side of the Church of Saint Peter in Gallicantu (cock-crow). This church sits above the historical site of the house of the Jewish High Priest Caiaphas, where Jesus was held in the dungeon below. Behind this church lies an ancient stone staircase that leads down towards the Kidron Valley. This is the actual staircase from the 1st century AD. They may have served as the passage from the upper city to the lower city during the time of the first temple in Jerusalem. 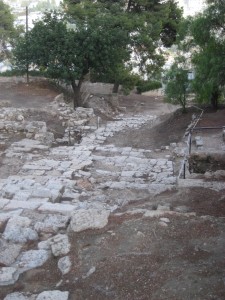 Jesus’ sandals as He was forced up them after being arrested in the Garden of Gethsemane. His blood was splattered on them from the beating He endured as His captors bludgeoned their prisoner without mercy. These stones bore their Creator up and onward to His ultimate destination—Golgotha.

This is a place that oozes sorrow. There is a sadness here that is tangible—you can feel it. These stone treads must have sobbed that night in shame for having been the pathway Satan chose to use to expedite the sham trial and eventual death of the Savior. They must have wept, because I could hear them weeping in my spirit both times I have visited this place. There is a heaviness here that almost smothers you.

In 1997, on my first visit to Jerusalem, I climbed these steps one-by-one, slowly imagining what it must have been like that night as the powers of darkness loosed their rage on the Lamb of God through men—just like me—who had been created in His very image and likeness. It struck me, that if I had been there, I could have been one of those men. That was and still is a very sobering thought. Today, you can only look down the steps—they are no longer accessible to climb.

The stones cry out here in this place and their cry is not one of praise and worship—no, it is a cry of broken-hearted sorrow—a sorrow that will not be quenched nor silenced until the Son of Man returns again—but this time it will be different. This time He will not return as the Suffering Servant, but as the sovereign King of glory.