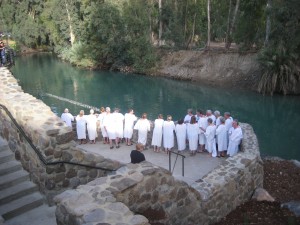 The Jordan River is one of those legendary places that any kid who’s ever spent any time in a Sunday School class dreams of seeing. It would rank right up there with the Nile, the Amazon, and theMississippi. Our imagination have been stamped by the events that occurred in or around it, as we learned songs with lyrics that describe it with mythical terms as being “deep and wide” with “stormy banks.”  Reality and imagination don’t always match up so seamlessly, but nevertheless I was not disappointed—just forced to adjust my expectations. A trip to theHoly Landwill do that in a lot ways.

The Jordan River begins at the Springs of Banias near Caesarea Phillipi at the northern most tip ofIsrael. Here, the crystal clear water of the melted snow from Mt.Hermonbegins its descent of almost 10,000 feet in the distance of 156 miles, culminating as it empties into the Dead Sea. Along the way, this river feeds theSea of Galilee (LakeTiberius) and provides the main source of water for Israel and some of neighboring Jordan. Today both countries draw out the life-giving water of the Jordan and use it to irrigate their crops of date palms, bananas, eggplants, peppers, and grapes. By the time theJordan Riverreaches the mouth of the Dead Sea, it is but a trickle, due to irrigation’s high demand. The result is an ever shrinking Dead Sea.

As you travel down the highway beside the Jordan the scenery must be described in a twofold manner. On the side of where the Jordan flows, the flora of the landscape is lush and rich. But if you cross over the narrow width of the asphalt highway, it is dry and desolate—a wilderness of light brown soil littered with rocks. Rocks may be the only thing in theHoly Landthat will never require conservation—they are everywhere—in great abundance. Yet if water touches this rich, but arid soil, it blossoms with life seemingly overnight.

The Jordan has witnessed numerous historical events that are so rich in biblical meaning. It was through this dry riverbed that Joshua and the children of Israel marched, as God miraculously held back the spring flow of the Jordan upon entering Canaan. The old prophet Elijah and his protégé Elisha also crossed miraculously as Elijah struck the waters with his mantle and a dry pathway emerged. Naaman was healed of leprosy after finally obeying Elisha’s command and dipping himself seven times in its muddy waters. Here the miracle of the floating axe-head occurred. Ultimately, this river witnessed the baptism of Jesus by John the Baptist, where the Holy Spirit descended on Him in the form of a dove and His ministry was inaugurated. 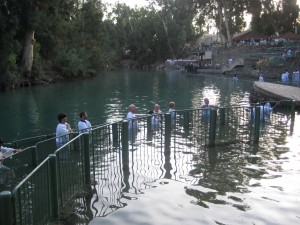 One of Jordan River Baptism Site

baptized in the Jordan River. There are several places that specifically cater to this desire by providing easy accessibility to the water, facilities for dressing, robes, and certificates of baptism for a small fee. They also provide small bottles for collecting and transporting a few ounces of this liquid memory back home. In fact, a whole industry has sprung up over the years to service this once-in-a-lifetime pilgrimage moment.