There is a hunger, a craving in all of us for something more. Something we can’t explain or describe. This longing is a desperate need that can’t be satisfied with facts, figures, or fickle fantasy. It won’t be met with any of the alternatives we, as desperate human beings, have attempted to substitute throughout our generations of habitation on this earth. No—power, position, prestige, money, sex, food, drugs, idols, and a thousand other endless, empty pursuits simply lack the power to quell the gnawing pangs of an internal hunger generated from the very genesis of our DNA. Blaise Pascal, a 17th century mathematician and Christian philosopher, summed it up this way: “What else does this craving, and this helplessness, proclaim but that there was once in man a true happiness, of which all that now remains is the empty print and trace? This he tries in vain to fill with everything around him, seeking in things that are not there the help he cannot find in those that are…”

This is not a “me” or “you” problem—this is a human problem. This satisfaction, this craving and helplessness as Pascal calls it, is etched in the primordial memory of our consciousness. The problem is no created thing can scratch this infernal itch and we can’t seem to remember what or perhaps who can.

That is—except God. Pascal provides the solution to the unanswerable question and the insatiable internal appetite: “…Since this infinite abyss can be filled only with an infinite and immutable object; in other words by God himself.”  This abyss in our soul and spirit needs far more than you or I can cram into it—we need God.

We were created by God for God. Let that sink in for a moment. God needs nothing so he did not create us out of a need. No, he created us out of desire. A desire fuel by an unconditional love he longed to lavish on created creatures made in his likeness and in his image. God desired that his heart be experienced—that is known intimately.

Sadly most of us have spent our entire Christian life in an attempt to explain God in a way we can understand. We demand rational explanations, deductive arguments, and laboratory experiments, which are finite at best and flawed at worst, to explain the infinite. We preach three point sermons with revelation, application, and illustration on things we cannot comprehend, or teach in-depth, perhaps inept lessons on things we have no real clue about, or worse, we write endless articles, papers, and books with seven steps to this and twelve steps to that when we are totally out of step in our flawed, yet limited approach. Yes, God did give us a brain to think with, but he also gave us five senses, an impassioned soul filled with emotions, and a spirit that can only receive communication on God’s personal frequency. God is not looking to be explained. He never explains his omnipotence, his omnipresence, or his omniscience. He simply declares it or demonstrates it. So why should we think we can explain him. No, God is intent on our experiencing him.

Perhaps this kind of thinking frightens you to death. Perhaps it sounds dangerous—you know that right brain stuff oozing into good, solid theological thinking. Perhaps you have been trained not to trust your emotions, and because of this, have shut them off completely in your pursuit of God. Instead you have chosen to be dependent on rational, intellectual, and cold, hard objective facts and figures to gratify that voracious hunger. So how is that working for you? Have the fangs of your ravenous soul stopped gnawing? Has your heart stopped longing for something more? Are you still cramming things that don’t fit in that God-shaped vacuum?

Stop the explaining and begin the experiencing. You can use your brain, but realize you are far more than a brain—you are a spirit, soul, and body with a brain, not vice versa. Psalm 46:10 (KJV) says, “Be still and know that I am God…” To paraphrase this powerful statement—stop cramming everything you can into an infinite abyss and allow an infinite and immutable God to satisfy that ravenous desire he’s hard-wired in you.  Be still—stop explaining! And know—start experiencing! 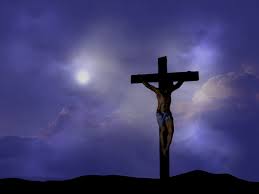 The light was blinding as the captives were led shackled with leg and wrist irons out from the dim, gloomy cells and into the street. Freedom and redemption were the last things on their minds. Naked, dirty, and beaten, the herd of broken humanity—prisoners of war—was pushed and prodded along the narrow streets by an unrelenting squad of soldiers to the center of town and into the market where the great auction would take place.

Cursing crowds of faceless torturers greeted the prisoners at every turn. The leg irons made walking almost impossible and so they trudged slowly through the abuse hurled at them by the cruel mob. Bloodied from the constant barrage of fists that greeted them each time they raised their heads, the prisoners finally arrived at the raised area in the center of the market. A huge crowd, with vengeance on its mind, cheered as the pitiful group of captives made its way slowly up the ramp onto the black block. This was the slave block from which each one would be sold as a slave to the highest bidder.

Men, women, boys, and girls, once proud and free, faced their tormenters defeated, broken, and without hope. Some wept silently, while others simply looked out at the merciless crowd with hollow, lifeless stares. Here on the slave stage the reality of despair became their hope for the future in the great drama they seemed destined to play out.

The dealer, a large dark individual with a loud blasphemous voice, began to call out the bid prices, and the sale began with a vengeance. Bidding was fast and furious. Strength and beauty, once considered valuable assets, made little difference to the buyers. Families were divided. Mothers silently died on the inside as their children were sold to monsters. Husbands wretched in agony as they watched their precious wives purchased by perverts. There in the market, life without hope became death without end, as each of the prisoners was auctioned to the highest bidder.

All at once, the crowd parted as a solitary figure walked to the front of the auction and stood before the slave dealer. An uneasy silence fell over the venomous crowd. The great prince offered to purchase the whole lot for a single price. With glee beyond belief, the dealer pondered what price the prince would be willing to offer for such a pitiful mass of humanity as this. Prostitutes, thieves, blasphemers, liars, drunkards, and adulterers made up this lot on the block and their value was minimal, the dealer thought, but the prince was, after all, rich beyond belief. And so with an insatiable, heinous greed in his heart, the dealer named his price.

Silence fell across the crowd. Without a word, the great prince stepped up on the block, took off his regal robes, and gently touched each prisoner with his healing hands of liberation. The chains began to fall away and the prisoners began to leap off the slave block. Families were reunited, and hope began to bloom as the little group made its way out of the dark city and up toward the great mountain, which lay to the east.

Along the road, the tiny troop heard a great hellish shout of joy go up from the city. One of the newly freed prisoners stopped timidly and looked back. The awful sight he witnessed would forever change him. As he stared, he beheld a solitary figure naked, beaten, bruised, and bloodied, hanging the air, with his arms stretched out and feet pressed together, pierced with jagged pieces of iron, as the merchants of death and the grave bid for his body.

I am the one who looked back and I tell you the truth of what I saw that day. Suspended between heaven and earth, planted above the slave block was the price of my redemption…the Great Prince Himself.

He gave His life to redeem us from every kind of sin, to cleanse us, and to make us His very own people, totally committed to what is right.” Titus 2:14