Yesterday I dropped some Operation Christmas Child boxes off at Ms. Jo’s Little School Kindergarten in Gardendale. This group of preschoolers chose to make the Shoe Box Ministry a part of their Christmas giving project. I had planned to knock on the door and hand the boxes off, but Ms. Jo invited me in to meet the kids—a sort of show and tell of what her pastor does.

The boys and girls were quiet, respectful, and listened intently to what I had to say. As I finished speaking, one little boy raised his hand and asked, “What’s wrong with your arm?” I was dumbstruck not understanding what he meant. It seemed he had noticed very astutely that I had a small band aid on my left arm and was concerned about the injury it covered. 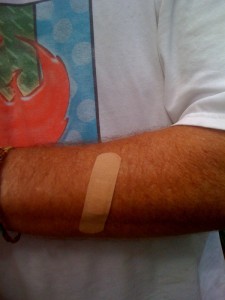 I replied, “Oh, it’s just a boo-boo,” hoping that would be enough of an explanation, but that was not.

“What happened?” he asked.

Now I had to think because I had forgotten all about the band aid and why I even had it on. Here I was standing in front of ten kids with silver-dollar sized eyes staring at me with concern, who had forgotten about the pastor and his job and were now transfixed on a tiny flesh-colored band aid on my forearm—alarmed at the present state of my health and welfare.

“How?” was the next response from this anxious classroom of kids.

Ms. Jo stepped in and the conversation moved from band aids to tee-shirts, and I said my goodbyes and slipped out. But the Holy Spirit would not let the band aid question go.

Those little children were far more concerned about my tiny wound than impressed with who I was. They listened quietly to what I had to say, but looked far more intently at who I really was. To them, I was simply another person, perhaps a bit larger, but still a fellow human being. And to makes matters more interesting—the band aid signified that I was injured or hurting. It was a fluorescent, flashing billboard-sized clue to a little boy checking the real me out.

I know when it happened! It happened when we stopped looking at others through the wonder, through the innocence, or through the genuine concern of a child’s eyes. Compassion became suspicion. Concern became fear. And we stopped looking because we were afraid we might truly see the pain and thus become responsible for bringing health and healing to those who are hurting. If one can see the pain of another, turn their head and go about their life without any concern—that person is in reality no longer alive.

Unless we—that’s you and me—become like children again we will never see the pain of those around us, much less the kingdom of God. By the way, I didn’t make that one up—Jesus did!