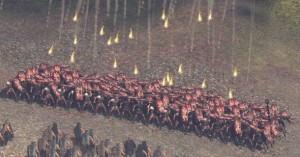 Watch out for those fiery darts!

What consumes your thinking? What are the issues, dreams, or fantasies running laps like a track star in your head right now? Are they wholesome or destructive, good or evil, productive or worthless? You are the sentry who stands guard at the entrance to your mind. Whatever you allow to squeeze in has your permission to be there. It is your mind after all.

The mind is the battlefield on which spiritual warfare is first waged. It is the first line of defense. Therefore it is very important to learn how to defend it and wage warfare from a mind set on Christ.

The enemy’s favorite tactic is to launch a fiery dart (a thought that opens one up to temptation, elicits a wrong emotion, or spurs a bad idea or action). In ancient warfare, arrows were dipped in boiling pitch and set afire. They were designed to set anything they touched aflame. When a fiery dart hit, the burning tar would splatter, throwing tiny droplets of liquid fire everywhere, creating multiple fires and panic. This is what the devil wants to do in our mind. If he can set it ablaze with a thought, he will simply stand back and watch us burn.

His goal is to entice us to conform (to be pressed into a mold) to the world’s belief system (his own personal system in disguise) rather than God’s. Consequently, he will tempt us with was is exciting, popular, satisfying, or intriguing. He will present good and normal things that are legitimate needs, but his goal is tempt you into satisfying those things illegitimately. Temptation is a trap he presents, but you have to jump in it for it to be successful.

The devil cannot make you do anything. All he can do is pitch the bait and stir up your thought life. He needs a partner to be successful. That is why it is so important to protect your mind. What you spend time things about for long periods you will eventually do.

You cannot stop the thoughts from coming. They are like arrows being shot at you by the enemy. But, you can decide which ones you will allow to cross the threshold and remain. We are to take every thought captive. That is, to stop it at the entrance of our mind and question its value. You would never let a stranger in your home without asking a ton of questions and verifying the information. Don’t allow the strange thoughts the enemy sends knocking entry either.

Shut the doors of your mind and install some screens on your thinking. Look hard at what you allow to enter through your sense gates. If you don’t want Satan to build a vacation resort in your head for him and his demons, then don’t be deceived by those invitations he sends through the mail to your mind. Deal with it like you do junk mail—throw it in the garbage in Jesus name!