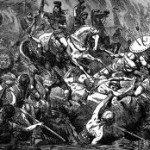 This battlefield is under relentless attack from the devil. It is here he wages his warfare so that he might influence or control (not a great deal of difference between the two) us. He knows that what we think eventually becomes what we do. What we believe we eventually become.

The apostle Paul warns us about this battlefield when he tells us in Ephesians 6:11 to “put on the full armor of God, that you might be able to stand firm against the schemes of the devil. The word he uses is methodia and it can be translated plans, craftiness, wiles, methods strategies, or schemes. In other words, it is his modus operandi—his M.O. The root of this word is odos and it means “a roadway” (Exodus means the way or road out).

The enemy uses the same M.O. on each of us. His plan is to construct a road way—a highway—into your mind, gain a foothold, develop supply depots, and establish strongholds. He uses the road way to supply and strengthen his strongholds from which he will influence or control your thoughts. These strongholds are nothing more than fortresses of sinful or wrong belief, and as they grow, his ability to control what you think increases.

He is after your mind, not necessarily your brain. Your brain stores information, but your mind is who you are. It is a part of your soul, which is the storehouse house of your thoughts, feelings, emotions, and memories. If he can control the mind he wins!

In warfare, if you control an opponent’s head you control the fight. And if all else fails, you cut your opponent’s head off so that he is no longer a threat. That’s not a warm fuzzy, but it is reality and many of God’s sons and daughters are either under the influence of the enemy’s remote mind control or decapitated posing no threat.

The devil attacks through the sense gates (taste, touch, sight, hearing, and smell), through the emotion gates (how we feel—our experiences), and the rational gate (what we think). All three of these gates are very vulnerable unless we are very, very careful. They are also incredibly easy to manipulate. That’s why Scripture tells us to flee—to run for our lives when it comes to sin. That’s why we are told to test everything by the standard of truth contained in the Word of God. We cannot trust our emotions and experiences one hundred percent of the time, but we can trust what God tells us in the Bible every time. That’s why the early church was so insistent on clear biblical teaching and practical doctrine. That’s why they were so adamantly against false teachers and teachings.

If a spiritual warrior understands what the Bible teaches then that warrior can defend his or her mind rather easily against a lie. If a spiritual warrior is unfamiliar with Scripture, the mind is a fertile field for manipulation and a lie is easily engrained as truth. Where falsehoods reign the enemy will always rule.

What’s on your mind? What do you think about?  Do you know the terrain of your mind? Are there wilderness or desolate places you refuse to revisit for some reason? If so, don’t be surprised if you when you do look you find an enemy flag flying above a stronghold that has been constructed there. If so, you may be on remote control and not even know it. Or worse…