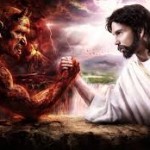 The lie of dualism!

The key to victory is position. Real estate and business people would translate this in mantra you’ve probably heard: location—location—location. Position and location are synonymous. In spiritual warfare it means understanding your position with regard to the enemy. Our position as believers is “in Christ.” Paul tells very clearly in Ephesians 6:10 to “be strong in the Lord and in the strength of his might.” Our position is in the Lord.

Too often the devil is given far more credit than he deserves. He has moved from what the Bible calls a rebel and a defeated foe to an almost undefeatable foe. In fact, in some circles, he has almost achieved the level of deity, that is, his power is on par with God’s. In other words, there’s a battle going on in the universe between the forces of good and evil, and who knows which way it will go. Only time will tell!

This is a heretical belief and it has a name—dualism. The devil is the author of this system of course. Anything he can do to elevate his position while creating uncertainty and fear in us is the signature of his calling card. Dualism teaches that there are two equal and opposite principles or parts, i.e. the battle of good versus evil or God versus the devil. Almost every culture and religious system is polluted with this pretentious propaganda. Judaism and Christianity alone guard the garrison of veracity when it comes to truth and reality. This philosophy is the incubator for the yin and the yang of belief of the East and the Jedi’s and Dark Side of Lucas’s Star Wars.

But the Bible does not teach that God and Satan are equal and opposing forces. Quite the contrary, the Bible teaches that God is eternal and sovereign, while the devil is a created being, a former member of the cherubim class of angelic beings created by God. In fact, God created everything, which gives him absolute authority and complete power. There is no one like God. He is omniscient (knowing all). He is omnipresent (being everywhere present at the same time). He is omnipotent (all powerful). The devil possesses none of these characteristics. He is limited in knowledge, travel, and power. Plus, he is living on borrowed time. If you doubt that read the end of the Book (Revelation 20:10).

Dualism, along with centuries of superstitions and folk religion’s beliefs, tends to create a devil that is far more powerful than reality. Let me put it in the simplest terms possible—God has no enemy who is equal to him. He has no enemy who threatens him. God stands alone. To be a credible enemy one must possess the ability to be a threat and Satan certainly does not. One word from God and he would cease to exist.

You cannot compare God and the devil in the same sentence God alone is God. He stands alone and everything else in this creation whether visible or invisible, physical or spiritual bends its knee and bows its head before him as King of kings and Lord of lords.

And. . .the best part of this story—we are God’s kids. We are in Christ. It pays to know the position you hold.