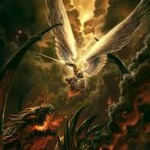 War is raging all around us and most Christians would rather look the other way. They don’t want to consider it, much less acknowledge its reality. For many believers, their response is to dig a foxhole and pull the dirt in on top of their heads, while praying really hard for the return of Christ, That’s not a foxhole, that’s a grave. Fear, uncertainty, and a desire for peace at all costs has caused many to compromise their long-held biblical beliefs, resulting in the mentality that one must go along to get along. The term “toleration” has for many become a synonym for the surrender of their core values, and this surrender will eventually result in slavery.

This war is not a physical war with tanks, planes, and Star War-like weapon systems. Our enemy is not flesh and blood. It is not a rogue nation or despotic dictator. No, this war is a spiritual war being fought on various fronts. Open your eyes and you can see the battles taking place all around you in the various theaters of operation—the cultural, societal, political, religious, entertainment, media, technological, medical, educational, scientific, philosophical, and judicial theaters. This battlefield is multifaceted and the face of the battle being waged changes moment by moment. There is an all-out assault being waged against the Judeo-Christian world view as taught in both the Old and New Testaments. Again let’s be clear—our battle is not against people, our battle is against a spiritual enemy known as Satan. His desire is to steal, kill, and destroy the children of God. And unless we stand firm against him, he will succeed.

We can no longer ignore this war because we live on its battlefield no matter where your subdivision, rural route number, or cul-de-sac is located. Walls, dogs, security systems, and guards cannot keep it out. It will eventually find you no matter where you hide. The time has come to wake up, get up, and stand firm. The time has come for the body of Christ—the Church—to get a bucket of guts and straighten her backbone and stand up. We were not called to go along like a jellyfish riding the ocean’s currents; we are called to stand up for what is right and to stand firm against what is wrong—both of which have already been decided, determined, and declared by a holy God, not by legislators, judges, or nameless, faceless crowds of tweeters. Right and wrong can never be determined by democratic mobs, but only by an omnipotent, omniscient, and righteous Creator.

If the present day church hopes to be victorious, she must begin waging a spiritual warfare that it grounded in biblical truth rather than passive ignorance and utter stupidity. Acting like nothing is wrong, or that everything will eventually get better is the height of ignorance. No, we must join the battle in the power of the Holy Spirit and war against this ancient enemy in Jesus name. We can learn warfare, engage the enemy, and walk in the victory of Christ, or we can remain passionless, powerless, and passive, while we watch everything we love and hold dear go straight to hell in a hand-basket.

This is our choice—yours and mine! As for me, I choose to stand firm—to hold the ground God has given me and await his command to take ground. I choose to resist the devil in Jesus name, and then he will flee from me.