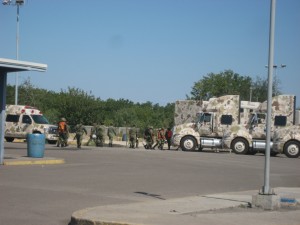 Crossing the border into a foreign country can be a life-changing moment because you never know what to expect. It can be an anxious moment, wondering if your passport and luggage are in order—or it can be routine. You never know.  I have learned not to sweat it—just do what you’re told with a smile and answer the questions with a simple yes or no. Border guards and immigration officers don’t get paid for long conversations so they are usually not very talkative. Plus soldiers dressed in camo fatigues with big guns and even bigger ammo clips really don’t have to say much anyway—they just point! I think you understand what I’m talking about.

So how can crossing a foreign border be life-changing you might wonder? Let me try and explain. We traveled to Mexico with a guy who goes at least once a month. We were to present our passports and ask for a seven day tourist visa.  He coached us on what to do if this or that happened. He has seen anything and everything happen so I was determined to do exactly what he suggested. The seven day visa was free and the other option was $25. We were prepared for either, but hoped for the free option. After a prayer together we went inside, stood in line, presented our documentation, and all six of us received the free travel visa. As you stand in line and talk with an official who is not impressed with who you are or where you come from, you quickly realize you truly are in God’s hands. Add to this the obvious language barrier and it can become a rather unsettling moment. Your comfort zone disappears rather abruptly and your faith either grows or fear grabs hold.

Once the visa was in hand, your vehicle is directed to an inspection point where soldiers in full battle fatigues (not policemen) point and bark specific commands. These guys have no level of toleration—you either do what you’re told or else. I understand why as they are in a life and death war with the drug cartels for their country. Again the language barrier makes it a bit uncomfortable, but after a pass around the van with a drug dog and the mirrors we were on our way to a wonderful week of ministry in Mexico.

After you go through this little exercise, you realize you are not in Kansas anymore Toto. In fact the cold hard reality that you are no longer in the United States of America settles in. You are now a foreigner in a strange land where customs, language, and laws are all different from what you have always known. That has a tendency to shake up your world a bit—to be life-changing to say the least. Who you are, where you come from, and what you have accomplished in life up until that moment really makes little difference to the people you meet. They don’t know you, and what they do know about where you come from has been carefully filtered through government propaganda and the perverted Americanized television sitcoms beamed in by satellite. It seems they, like us, have a hard time believing that their government and the television would ever lie

It would do every American good to cross a foreign border at least once. Uncertainty and anxiety have a way of getting rid of arrogance and we, as Americans, an arrogant people. Humility is not one of our stronger points as a nation, but when you are not in your nation—humility, a gentle voice, and patience will take you far. In fact those three traits, plus a current passport will get you into almost every foreign country on the planet. Plus—and best of all—those same four things will get you back into the good ole U.S. of A.

Those simple things can be life-changing at a border crossing. Or if you prefer—you can be arrogant, loud, and impatient and thus enjoy the personal attention you will certainly get with a full body search, an interrogation session, possible luggage confiscation, and that $25 visa.