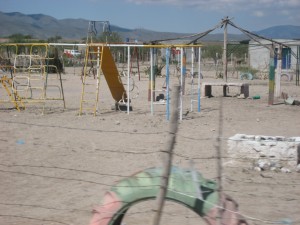 Some life-changing moments grab hold and won’t let go. They affect you deep within and their memories seem to haunt you like a bad dream. That moment demands that you do something, but what has yet to be determined. Let me share one and perhaps it will seize your heart as it has mine.

One afternoon, we took a ride out into the countryside east of Parras to see some of the villages. The scenery changed very little on the trip out, with the landscape dotted by mesquite and cactus framed by the jagged peaks of the Sierra Madras. Twenty miles out, we turned off the main road and pulled into one of these villages.

Every village of any size has a small one or two room school with a playground. There is usually a soccer field of some description and the houses are made of adobe brick with most left unpainted. This particular village had been the recipient of some of their tax money at work. A new bridge had been constructed by the state and a half block of black top paving installed on either side. To me, this seemed a little out of place since the road leading to and away from the bridge was dirt, but oh well, the politician who secured this was pleased.

That’s when I saw something that still gnaws at my heart whenever I think about it. On the south 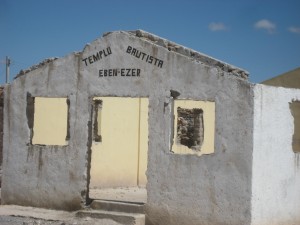 The Ruins of Ebenezar Baptist Church

side of the village was a building without a roof, doors, or windows. It was in ruins—seemingly abandoned, while its white washed walls were slowly deteriorating under the hot Mexican sun. What I was looking at were the remains of the Templo Bautista Eben-Ezer (the Ebenezar Baptist Church). It reminded me of a bombed-out building you might see in Iraq or Baghdad.

Every scene has a story and this one is heart-breaking. At one time there was no Protestant evangelical church in the village. The only church there had a policy of taking rather than giving, and these people had nothing to give. One of the churches in Parras took this village as a mission field and established a fledgling body that began to grow. In time, they moved into this building owned by two men, one was a believer and the other was not. The church began to impact the village and Satan began to lose the hold he exercised through witchcraft, drugs, and alcoholism. Things were changing.

In time, the job of one of the building’s owners took him away and he (the believer) sold his half to the unbeliever. A few weeks later, the new owner evicted this body of believers, tore the tin roof off, removed the doors and windows and sold them for scrap. Today the shell of a church building bakes in the sun as a reminder that our enemy is real and he is busy guarding what he considers his. Today this village is once again filled with drugs, alcoholism, abuse, and witchcraft and the local church that remains still takes and takes and takes, while offering nothing in return.

My heart was broken as I stood and imagined what could have been. This village was being 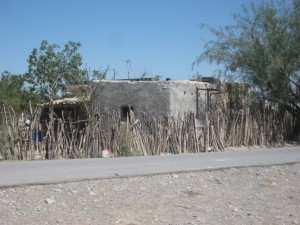 transformed. Lifestyles were changing. Bondage was being broken. Generational poverty and ignorance were being eradicated. Was and were (past tense) are the key words right now. The building is now empty and that body of believers is gone—but God is still waiting on someone who will take a stand against the enemy, love these people, and proclaim God’s glory. As I stared God began to stir within me a “what if.” What if a body of believers in America were to invest themselves in this little village twenty miles east of Parras, Mexico? What if indeed!

I’m not sure what will happen or what I can do, but God will show me. This scene out in the mesquite and cactus is an ongoing life-changing moment for me. It continues and who knows what its outcome may be. Who knows? God does and he’s looking for some life-changers!