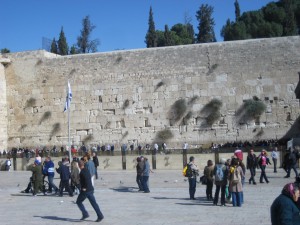 The Wailing Wall located on the western side of the Temple Mount is the only surviving remnant of the Temple destroyed by Titus in 70 AD. Due to this, it is the most significant holy site for the Jewish people. The Temple was once the center of Jewish life, both secular and religion, but after its destruction, that unifying element was gone. Today, the Temple Mount is home to the Dome of the Rock and the Al Aqsa Mosque and is regulated and controlled by the Muslim community in Jerusalem. The Jewish people do not go onto the Temple Mount due to the absolute holiness of this site and their reverence for it. Thus the Wailing Wall is the site devout Jews go to pray.

The Wailing Wall is divided into two sections for prayer, one for men and the other for women. This same custom has been observed since the first Tabernacle with a separation between the Court of the Men and the Court of the Women. Today, the Court of the Men is located next to the oldest part of the ancient wall hidden underneath an opening to the left of the Wailing Wall that leads back into a cave-like room. Here, out of the sight of camera flashing tourists, you will find the elderly Hasidic Jewish men dressed in black with long white beards rhythmically rocking back and forth chanting prayers from their Hebrew prayer books.

Back on the outside, you will notice thousands of tiny notes rolled up 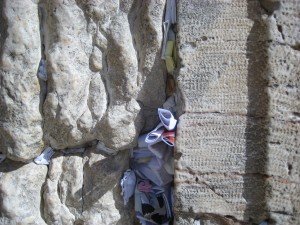 Prayer Requests in the Wall

and stuck in the Wailing Wall. It is the custom of those who visit the Wall to place their written prayer requests in the wall, believing this is as close to God as a human being can get. The witness of the Wailing Wall is not its proximity to God, but rather it is a powerful place of prayer. Not because it’s as close to God as you can get, but by the sheer number of prayers offered there each day for the peace of Jerusalem and the petition for the Messiah’s return. Both Jews and Gentiles flock to here to pray—pilgrims come from around the world with a desire to petition and intercede at the Wailing Wall. 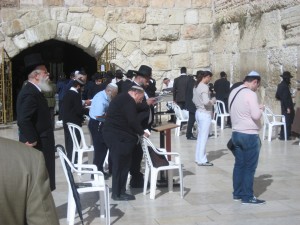 It struck me while I was there how sacred this place really is when I noticed a sign on a pole as I passed through the check point and the metal detectors. This sign declared: The Divine Presence Rests Here—Please Be Reverent. This conviction comes from the Jewish belief that the presence of God rested in the Temple deep within the Holy of Holies behind the veil over the Mercy Seat. With the Temple destroyed—the Jewish people believe God’s presence still rests here in this area of the Wailing Wall in a special way. God is there—not because of these ancient stones—but because of the incense of the intercession that arises from this place each day.

One day soon, God will answer the countless prayers for the Prince of Peace—the Messiah to return (this will not be His first visit as many who pray there believe—it is indeed His return). The eastern skies will open on that day—maybe today—and Jesus will descend onto the Mount of Olive and the mountain will split and He will walk across the Kidron Valley through the Eastern Gate and enter the Temple Mount at His victorious return. Muslim cemeteries and mosques won’t be able to keep Him away. On that great day, nothing will keep Jesus from His divine destination.

So, today as you pray—join the millions who pray daily for the peace of Jerusalem and the return of the Messiah, and you will be just as close to God as those pilgrims who are placing their notes in the Wailing Wall.