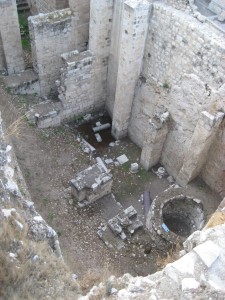 The Pool of Bethesda lies in ruins today, but in Jesus’ day it was quite a site to behold and the place to visit if you were sick. John describes it as a pool in Jerusalem near the Sheep’s Gate that had five porticoes or covered colonnades with rushing water moving through it. In the 8th century BC a dam had been built across the Beth Zeta Valley to provide a reservoir to catch and hold the rain water and provide a steady stream of water into Jerusalem. It is mentioned as the upper pool by Isaiah (36:2).

When the Romans took over they brought their pagan beliefs with them and likely incorporated them around parts of the Pool of Bethesda. Many historians believe this site was also an asclepieion (a healing place) where a temple to the god Asclepius was located.  Considered the god of healing, Asclepius carried a serpent entwined on a staff (the symbol of medicine today). This god was also worshipped as “soter” or savior. It is likely the Roman soldiers who were quartered in the Fortress Antonio carried on their pagan rituals alongside the Hebrew infirmed at these healing pools.

The name of this pool carries a dual meaning that Jesus would certainly have known. “Beth” means “house of” and “hesda” carries the meaning of mercy or grace, but the word “hesda” could also mean “shame or disgrace.” There was not a lot of grace or mercy extended to the sick by the religious elite of Judaism in the 1st century. They were seen as “unclean” due to their infirmities. Though the Pool of Bethesda was a place of grace where healings did take place—it was also seen as a place of disgrace due to the constant crowds of cripples, paralytics, and invalids who congregated there. They were there awaiting an angel who would come at certain seasons and stir up the waters. The first one in the pool was healed. Sadly, most of those lying around the pool simply could not drag themselves into the water fast enough and were doomed to wait for the next time or the next…or maybe the next.

This is the very place the Grace of God chose to visit and of all days, He did it on a Sabbath. Even a cursory reading of the Gospels reveals that the Sabbath Police seemed to follow Jesus everywhere, waiting and watching so that they could build a case against Him that could be used in their religious kangaroo court. And…they were in attendance that day when He healed the cripple man lying beside the pool. So Jesus stepped up and did not disappoint by healing this poor man.