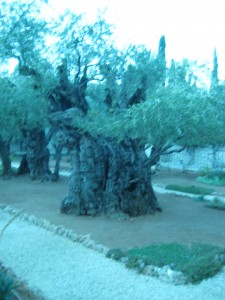 The Garden of Gethsemane is one of the highlights and one of the holiest sites for any pilgrim visiting Israel. This ancient olive grove is located at the foot of the Mount of Olives on eastern slope above the Kidron Valley within the walled grounds of the Church of All Nations. It was here in this garden that Jesus prayed while His disciples slept (a situation too often repeated) in those fateful moments just before He was arrested and later crucified.

This was a favorite spot for Jesus and His disciples when they attended the Jewish feasts and festivals in Jerusalem. They would often spend the nights here—tucked securely away from the crowds seeking miracles and the religious leaders seething with murder. As the sun would set, Jesus would retreat down the eastern slopes of Jerusalem along the winding trail from the Eastern Gate through the valley and into the garden. In the silence of these cool nights, they would talk of that day’s ministry and message, and pray together in preparation for the next. This was the spot were tired bodies found a respite and tired spirits were revived by the Holy Spirit.

This was the place where Jesus led His intimate band of followers immediately after their historic supper where the last Passover Meal was celebrated and the first Lord’s Supper was instituted. Among these olive trees Jesus left the larger group and took Peter, James, and John with Him a little deeper into the grove to pray. It is likely that some of these very trees (some over 2,000 years old) witnessed the great cosmic battle that transpired as God’s will became the only will worth dying for. 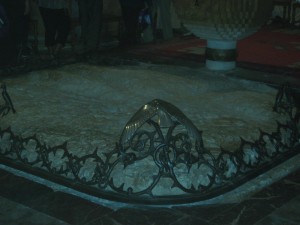 The Rock of Agony

As you step into the Church of All Nations (also known as the Church of the Agony) the focal point of the church is a huge flat stone that rests inside a short wrought iron fence in front of the altar. It was here that Jesus prayed alone as His three close friends were overcome with sleep. This stone soaked up every droplet of blood that fell from Jesus’ forehead as He prayed and wrestled with the direction of His destiny.  On this rock, the Rock of ages was chiseled into the cornerstone of a new house that Father God was building for His own personal residence.

In this garden, the second Adam did not succumb like the first to the ancient serpent’s tempting words, “Has God really said…?  And with the victory secured, Jesus watched the torches of the temple guards led by Judas snake their way back and forth down the crooked path from the Temple and awaited the traitor’s kiss that would seal the fate of sin’s deadly dominion once and for all. This secluded garden had just witnessed a prelude in the darkness of what would transpire in the light over the next three days. The Son would rise and the light would overwhelm the darkness. 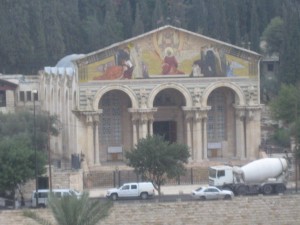 The power of Gethsemane is not the ancient trees Jesus knelt under or the stone Jesus prostrated himself on. No—the power of Gethsemane was that simple prayer that shattered the power of hell. A prayer so powerful it echoed back through the portals of time to another garden where one act of self will had set in motion this amazing act of selfless will. The power rests in these simple words uttered by our Lord—“Not my will but Thy will be done!” In that surrender the victory came.

That power is available for any situation or circumstance you face, but you must surrender and allow the Father to squeeze or press (Gethsemane means oil press) you until like Jesus you confess, “Not my will but Thy will be done!” In that surrender victory will come.