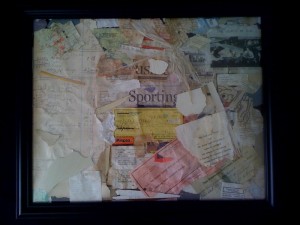 The degree of devastation in a disaster is usually determined in the days that follow it. Thursday, April 28 was such a day. As the sun began its westward climb this grim truth became apparent. The grizzly reminders of the past Wednesday were painfully etched in Thursday. No other day of weather has ever been so deadly in Alabama.

This day would forever change my life and ministry. Returning from an early morning walk Cathy showed me a check she had found in our driveway. This check belonged to a person with our same last name and the address was Tuscaloosa, almost 70 miles to the south. The same storm that had devastated that city rained its shreds of stolen booty across our property. But…the likelihood of a check belonging to a Hannah in Tuscaloosa landing in the driveway of another Hannah that far away was not coincidence; it was God, and He was about to use a prophetic picture to proclaim the necessity of a profound message.

Sensing God had something to say I followed His leading and began picking up what many might term debris, but for me these fragments were sacred. I was gathering the past and present of people whose future was uncertain and whom I would probably never meet. Nothing was complete, just bits and pieces, slivers and shreds of lives destroyed in a moment by a terrifying wind. I must have climbed down from my tractor over a hundred times as I mowed the five acre field near the road, each time retrieving a precious portion of another’s private possessions. Scraps of receipts, a merchant’s ledger page from 1942, addresses, bills, half a wedding invitation, a corner of a page out of someone’s school annual, magazines, newspapers, and textbooks were mixed with bits of sheetrock, tar paper, painted luan splinters, vinyl siding, and various shades of Styrofoam insulation.

It was a somber task, especially when I knelt in the weeds and picked up a green and white plastic ball that had been kicked about the day before by a little girl in her yard. The thoughts of what might have happened to her gripped my heart and the tears began to flow as I considered my own four-year-old granddaughter. God was systematically demolishing every hesitance lodged deep in my soul that would preclude me from hearing clearly what He wanted to say.

I sensed in my spirit that I was to take these fragments of my culture and put them in a collage and frame them. It was a both a sobering and sacred experience as I painstakingly assembled it much like a CSI technician would re-assemble a crime scene. Its terrifying message suddenly gripped my heart as God’s voice echoed in my spirit.

“I want you to put this prophetic reminder in a place where you can look at it every day for the rest of your life. These bits of personal property represent real people whose lives are devastated. But…it also represents all the people who do not know Me. It is a picture of their lives, their relationships, their hopes, and their dreams. Though they may smile as you meet them, their lives are just as shattered as the ones who have survived this storm. The invisible storms are just as destructive as visible ones. They too, feel isolated and hopeless. I want them to know I love them with an everlasting love.”

Things grew quiet again, and a new revelation dawned on me as I stared at the collage in my hands. “Lord,” I said, “there’s absolutely nothing that represents You in this picture.”

Then God whispered, “You do!”